About the country Georgia

Georgia, an exquisitely beautiful country, is ringed by the Caucasus Mountains and set at the crossroads of Europe and Asia. It lies between the Black and Caspian Seas and has borders with Turkey, Russia, Armenia and Azerbaijan, along the Silk Road of ancient times. Since recorded time, Georgians have been famous for their hospitality to strangers.

The visiting ancient Greeks knew Georgia as the land of the Golden Fleece. It was a woman, St. Nino, who brought Christianity to Georgia in 330 A.D. Georgian wine has been produced for over 8000 years and Georgian literature dates back to the fifth century A.D. Scholars have compared the 12th century Georgian poet Shota Rustaveli to Dante and Shakespeare.

Caucasus is truly surprising place! And Georgia is heart of this region. The history of Georgia is very interesting and partly sad. This small mountainous territory east of the Black Sea is a crossroad of Western and Eastern cultures. The territory that modern Georgia occupies, has a perfect geographical location. That's why many foreign empires were attracted by this country. Greeks, Romans, Byzantines, Turks, Persians and so on. A lot of really powerful empires used to conquer this beautiful land. But this unique, brave and majestic people could defend its independence and it can be proud of a great deal. So visit this country and touch the mysterious atmosphere of proud country Georgia.

Map of the country Georgia 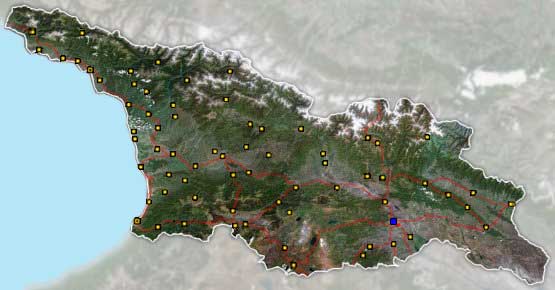 Interesting facts of the country Georgia

What is the size of the country Georgia?

What is the elevation?

The lowest point is the Black Sea with 0 meters and the highest point is mountain Shkhara 5,193 meters.

What is the total population?

Which languages are spoken?

Which religions are in Georgia?

What is special about Georgia?

The world's deepest caves are all situated in Georgia. Four caves in total and two of these caves are the only known caves on earth deeper than 2000 meters: Krubera Cave at -2197 meters and Veryovkina Cave at -2212 meters. They are known as the Abkhazian caves.